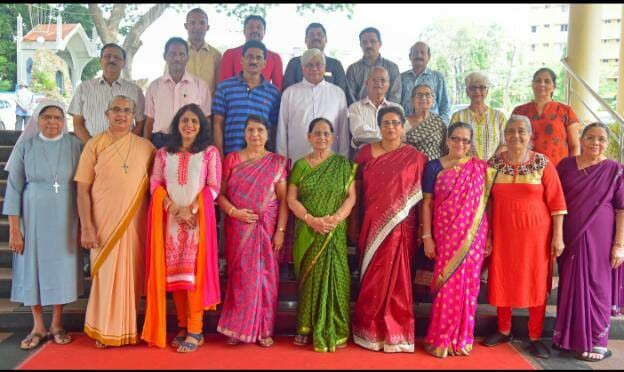 Through the efforts of Rev. Fr. J. P. Tauro, our Vicar, a Unit of Catholic Sabha was established in Bendur Parish on 14.01.1996, and through it Catholic Sabha set its foot for the first time in Mangalore. Our Unit has over 500 members.

A resume of our activities/programms during the initial six years is given below.

Due to our inherent aversion to politics, we have not been sufficiently involved in it. In order to promote political awareness among our people, we have conducted camps, organized campaigns and arranged talks through various resource persons. As a result of these programms and campaigns, in the last elections, as against a meager 18%, 95% of Christians had exercised their franchise. Many of our brothers and sisters have emerged successful in the Corporation, Panchayat and Municipal elections. In the University elections, we have ensured fair elections by seeing that no irregularities have taken place, which resulted in the election of five of our brethren to the Senate and one person to the Syndicate.

A protest rally was organized against the irregularity, misbehaviour, injustice and insult shown to a Catholic priest in Bihar. The role of the President and members of our unit in organizing and executing this mammoth rally was enormous.

A mass Movement was organized for getting the Dalit Christians registered in the Reservation List. Our Unit played an important part in this Movement. A Commission comprising office bearers and members of our Unit had met the Chief Minister. The necessity of giving reservation to Dalit Christians was impressed upon the Government.

To foster leadership qualities in children at a young age, children of standards VIII and IX were imparted Leadership Training and Mental Development Training. The parents also participated in the programmes and encouraged their children. Some resource persons from our Parish handled these Leadership Training programmes. Mr. Thomas Quadros, a talented resource person from Udupi, conducted successfully the Mental Development programmes. It was observed that the children found these programmes fruitful and beneficial.

Vocational Guidance camps were held for students from Standard VIII to P.U.C. In the same way, a camp on “Self-Employment and Rozgar Scheme” was organized. Mr. Narayana Swamy, Assistant Director, Small Scale Industries and Mr. Socrates gave detailed information on these schemes. A number of youth benefited from these talks.

Programmes giving information on health, AIDS and other diseases have been organized with the help of famous doctors of Mangalore. Also information on legal matters having day-to-day relevance was imparted through experts in Law. Every year in October, blessing of vehicles is arranged, imploring God’s favour and protection on the owners, drivers and passengers. This ceremony has been very much appreciated.

Teachers are responsible for the moulding of a good society. While they share their knowledge with their students, they inculcate in them good values, justice, love of God and country. The goal of the Catholic Sabha and the mission of teachers is complementary. The Catholic Sabha recognizes the need to honour their talents. In the past years, in September-October, Catholic Sabha has organized a get-together of the teachers and paid tribute to them. Efforts were made to make available their vast knowledge and experience to the youth and society.

Every year during our Annual Day celebrations we honour persons who have excelled on the University, State, National and International levels and those who have exhibited courage and valour on special and extraordinary occasions and won honour for themselves and the society by winning medals. Our aim is to acknowledge their talent and also present them as examples to others.

Mr. Canute Crasta of Permannur, who came to participate in the Dalit Rally, died in an accident on his way home. Not only was an amount of Rs. 22,000 collected and handed over to his indigent family, but another amount of Rs.1,00,000 was collected and kept as fixed deposit, so that the interest accrued on it may be of help to them. When Christians of Vorkady were victims of tragedy caused by injustice and violence, high Government officials and the Chief Minister were contacted and the injustice done was stopped. Further these destitute families were provided moral support and also relief in the form of money, rice and other essentials. A girl from Pavur, working as housemaid, who accidentally fell from the roof and was rendered permanently invalid, was assisted to the extent of Rs. 26,000 through collections. She was also assisted to get some of the equipments.The poor children studying in the Bethany School were given Rs. 25,000 as aid.A lot of effort was put in for a long time for the release of Kumari Pauline, a housemaid, reportedly undergoing torture at the hands of her employers in the Lebanon. We have
also participated in the improvement of the condition of Dalit in Pavur.

“Rachana”, an association, is one of our gigantic schemes. On 6.1.1998 a large convention of industrialist, doctors, lawyers, businessmen, professionals, proprietors, planters, chartered accountants, etc., was arranged. At their second meeting on 1.11.1998 an association named “Rachana” was formed. Its aim is to unite all Catholic professionals/industrialists and through it bring about the economic advancement of our society, especially the youth, by making available to them suitable facilities, guidance, etc. Our Unit has had a major role in organizing the get-togethers and establishing “Rachana”.

Many of our brothers and sisters who had deposited sizeable amounts in private Finance Companies were experiencing great hardship due to liquidation of the Companies and non-availability of the amounts deposited by them. With a view to help them, the aggrieved have been brought together in consultation with legal experts, and a Society “ Navachetana” has been registered, so that they can pursue their efforts to regain their money. They have the backing of the Catholic Sabha.