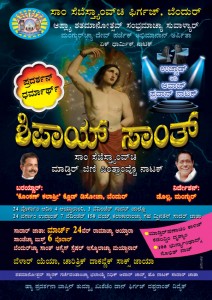 St Sebastian’s Church Bendore will stage the mega play ‘Sipoy Saanth’ based on the life of patron St Sebastian, one of the early martyrs in the history of early Christians, at St Agnes Special School Grounds on Sunday March 24 at 6 pm.

The inspirational true life story of St Sebastian is penned by senior Konkani playwright Konkan Kalashree Claud D’Souza, Bendore. The play was staged 24 years ago at Don Bosco Hall on 3 stages for 4 consecutive Sundays, then directed By Prof Alban Castelino.

This time the responsibility has been shouldered by well-known dramatist of Konkani, Dolla, Mangalore. The play involves more than 130 artistes from in and around Mangalore. Heart touching scenes which will display the torture given to the faithful in the early years and splendid dance by little children will be an added attraction of the play. The play will be presented on 7 stages at St Agnes Special School Grounds on Palm Sunday March 24.

The programme commences sharp at 6PM and the organizers are expecting more than 5000 people to witness the show. The play is purely on Sound and light effects which will elevate the quality of presentation and will be etched in the memories of people. The entry for the show is free, however to meet the expenses of the play Donation coupons are issued and for those who have the coupons will get a privileged seating for the play. The proceeds of the play will go to the Centenary celebration Medical fund. This fund is floated to mark the celebration year and utilized for the needy patients of our society.

Rohan Corporation of Mangalore is the main sponsor of the mega play.

St Sebastian was an officer in the Roman army, esteemed even by the heathen as a good soldier, and honored by the Church ever since as a champion of Jesus Christ. Born at Narbonne, Sebastian came to Rome about the year 284, and entered the lists against the powers of evil. He found the twin brothers Marcus and Marcellinus in prison for the faith, and, when they were near yielding to the entreaties of their relatives, encouraged them to despise flesh and blood, and to die for Christ, light shone around him while he spoke; he cured the sick by his prayers; his divine strength led the multitudes to the faith, among them was the Prefect of Rome, with his son Tiburtius.

He saw his disciples die before him, and one of them came back from heaven to tell him that his own end was near. It was in a contest of fervor and charity that St. Sebastian found the occasion of martyrdom. He continued to labour at the post of danger till he was betrayed by a false disciple.

He was led before Diocletian, and, at the emperor’s command, pierced with arrows and left to die. But God raised him up again, and of his own accord he went before the emperor and conjured him to stay the persecution of the Church. Again sentenced, he was at last beaten to death by clubs, and crowned his labours by the merit of a double martyrdom. 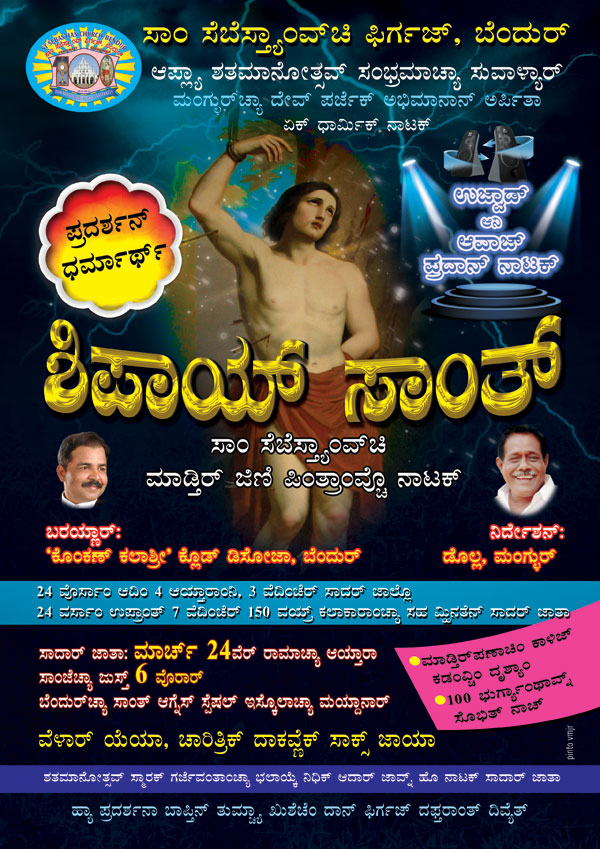